During three weeks a number of performances took place around the city of Turku. In the performances were asked some questions like: Do you think you own that space?, Does my presence restrict your freedom? and Is this space being used to it’s full potential? 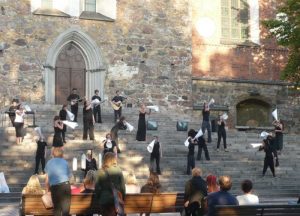 The work pretend to question the use of public urban spaces and to temporarily transform spaces for community engagement.

The residency was part of the Rapid project. Artists from Portugal, UK and Finland collaborative and cross-disciplinary work with the communities (disadvantaged communities located on the outskirts of Turku) and artists from the Titanik Gallery.

“Do you think you own that space?”

A container placed in the street had a video projection of discussion around a ‘kitchen table’. The video was shot in the recycling centre in the workers kitchen. The container formed a ‘room’ within a fictional house in the street containing furniture and other elements. People took part in the activities in the ‘living room’ area.

In collaboration with Beverley Carpenter and Rapid artists.

Balloons were given to people with a number of questions and suggestions written on them around the use of public space.

In collaboration with artists from Gallery Titanik.

Ladies from the community living on the outskirts of Turku came to take part. They are wearing hats crocheted from video-tape.
They ask in text questions such as “is this space being used to it’s full potential?”