In the project artistic participation methods were used to create a specific artistic situation. The specific situational art examines local and temporal conditions, for example, social, physical or economic aspects. Art reacts to the results and the possibilities of the situation. The project focused on four European streets in the cities where the universities of the participating countries are located, their actors, environments and identities. The project activities were organized by the TUAS Academy of Arts and were located in Turku on Linnankatu Street. 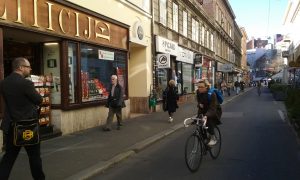 Tesla street in the center of Zagreb, Croatia

Participative entities in the project:

Objectives: Multi-professional approach, the learning of collaborative artistic practices and the challenges when working in urban spaces, learning to use specific situational methods of limited artistic duration. 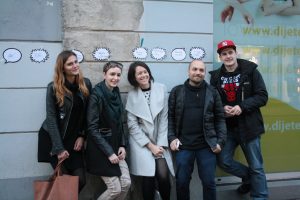 Team of artists (Susana Nevado and Kai Lossgott) and students of the University of Zagreb designed (Josipa Galic, Alexander Stankou and Matea Milin)

The starting point was to use speech bubbles. We decided to offer people sandwiches from a restaurant on Tesla Street as starting point for our performance. At the same time, we asked pedestrians about the street, what is their connection to it, what would they change or would they like to add to it? 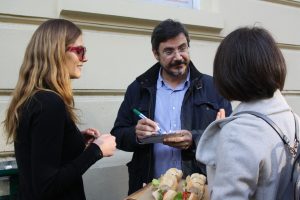 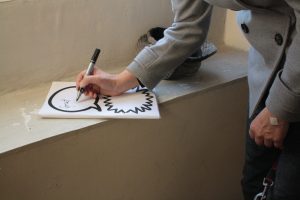 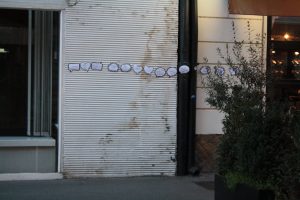 A lot of people talked to us and wrote their ideas on the papers. Tesla Street is one of the oldest and is located downtown. Many expressed their opinions about what to do or how they would like to be there, what they like and what is good in it.
Workers, young people, tourists, children and even a beggar child told us how on that street a barkeeper beat him for asking his clients for money (some of the restaurants on the street are frequented by Croatian celebrities). This made us see a new and different side of the street, another level to investigate and another point of view. 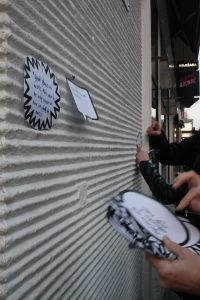 The group of artists and students checking the results obtained after the workshop plan the following steps to follow.
We paste the sandwiches with the ideas of the passers-by on the facades of the street, forming a line the height of the eyes, which could be read easily when walking.
Pedestrians were actively involved with the project, wanting to make decisions about their environment.
The students learned new methods of interactive work to develop this type of interventions in the public space in the future.
Many of the answers had to do with environmental issues: fewer cars on the street, more pedestrian areas.

Workshop with the students to talk about where the workshop was going to take place (the Vukovic & Runjic book store), visit it and see the ideas that we can use from the first workshop on Tesla Street in 2015. We develop ideas and methods collaborative
People were worried about using the street and the amount of cars that pass per day.
The idea of ​​the workshop was to use colored tape to draw in the shop window. We decide on formats, colors to use the idea of ​​work and objectives. We wanted to ask a specific question about whether we wanted to transform the street into a pedestrian street or not. For this we think about making very simple forms, we use Facebook to ask the students of the same university and we add the red ribbons in the window, we also ask the passers-by to participate with us. 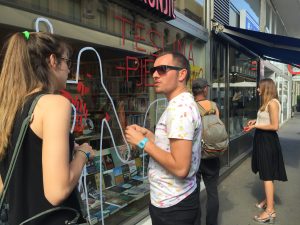 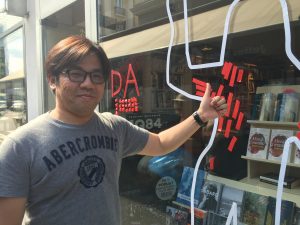 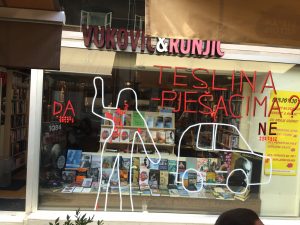 The result was clearly overwhelming, people betting on pedestrians and not cars. The workshop had a lot of media coverage both in the newspaper and on Croatian television. 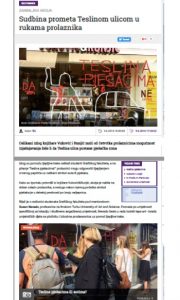