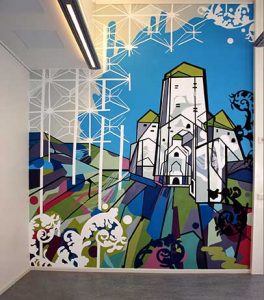 Wall painting carried out by Susana Nevado, painting teacher at the University of Applied Sciences of Turku, and by its students, Juha Kärki and Outi Vihlma.
The painting gives a modern view of Turku Castle, which is one of the most well-known monuments of the city. 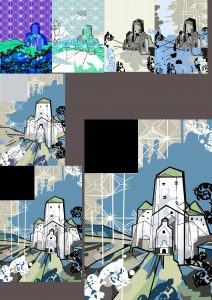 The image of the castle in the mural is made up of geometric shapes, with superimposed layers, which give the impression of greater depth and makes reference to the many phases of construction of the building.
The mural repeats the ornamentation of one of the halls of the Turku castle and one plan of the arcade of another.
In the work appear elements such as the sky, the land and the sea, which refer to the location of the castle of Turku.
The work is painted with acrylics, using templates.

The work was carried out in St. Petersburg, Russia, in May 2012. 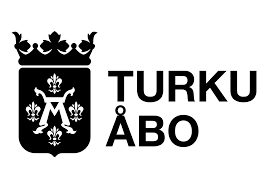